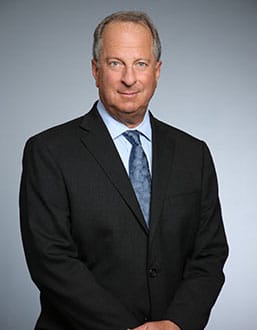 David E. Rapoport is the founding and managing partner of Rapoport, Weisberg & Sims P.C. In 37 years as a full time trial attorney, he has consistently won multimillion-dollar jury verdicts and settlements for people who have been wrongfully injured and the families of people who have been wrongfully killed. Recently, as the lead trial attorney, David obtained record high jury verdicts and settlements for his clients. In 2018 he obtained a $7.5 million settlement in maritime work related lead poisoning cases and a $6 million settlement in an aviation case. In 2017 he negotiated a $ 6.4 million combined medical malpractice and product liability settlement and received a $3 million landmark jury verdict against a pharmaceutical company in a drug induced suicide wrongful death case. In 2016 his client's $4.3 million jury verdict in an Illinois medical malpractice case was affirmed on appeal. In 2015 his clients received a $3.4 million jury verdict in a truck/pedestrian collision case tried in Chicago. Other recent results include a $7.1 million jury verdict in a Kentucky airplane crash wrongful death case; a $6.9 million settlement (while the jury was deliberating) in a semi-tractor-trailer/automobile collision case tried in Wisconsin; a $1.942 million jury verdict in another semi-tractor trailer/automobile collision case tried in Wisconsin; and a $13 million settlement in a semi-tractor trailer truck crash case litigated in Chicago. David has served as the lead or managing trial attorney in cases resulting in jury verdicts and settlements exceeding $250 million. Click here to read more about David's record in court. http://www.rapoportlaw.com/Verdicts-and-Settlements/.

David represents people harmed in air crashes, semi-truck and motor vehicle collisions, medical malpractice, product liability accidents, recreational and commercial boating accidents, premises liability accidents, work injury and construction accidents. He has been appointed by federal judges to serve on plaintiffs' steering committees in airline disaster cases, and he is known nationally for his work representing injured victims and the families of those killed in air disasters.

As an aviation attorney, David has served on several court appointed plaintiffs' steering committees in major air disaster cases, where he has represented passengers, their families, crew members and their families. For details click here: https://www.rapoportlaw.com/Over-Three-Decades-of-Commercial-Aviation-Experience.shtml. David was the Chair of the Chicago Bar Association's Aviation Law Committee from June of 2017 to June of 2018. In 2019 he was designated by the National Trial Lawyers as a "Top 10 National Aviation Trial Lawyer".

By helping people and holding the at fault parties accountable, David helps make the community safer. David provides customized services to every client he represents, offering the compassion and skill they need to get just results, while remaining as comfortable as possible with the process.

David is a member of the invitation only American Board of Trial Advocates (ABOTA), an association of premier trial attorneys who are dedicated to preserving the right to trial by jury. ABOTA's general mission is "to foster improvement in the ethical and technical standards of practice in the field of advocacy to the end that individual litigants may receive more effective representation and the general public be benefited by more efficient administration of justice consistent with time-tested and traditional principles of litigation."

Since 1990, David Rapoport has been Board Certified* in Civil Trial Law by the National Board of Trial Advocacy ("NBTA"), the oldest and largest not-for-profit American Bar Association ("ABA") accredited trial attorney certification program. Attorneys with NBTA certification have proven specialized abilities through written examinations and meeting rigorous criteria for trial experience and ethical ratings. David has proven his currency and substantial trial experience through NBTA recertification in 1995, 2000, 2005, 2010 and 2015. He is also board certified* by the NBTA in Civil Practice Advocacy.

David is a leader of the movement to encourage board certification for trial lawyers. From August of 2013 to August of 2016, he was the President of the NBTA. He remains actively involved in the NBTA as a Director, a member of the Executive Committee and the Chair of the Communications Committee. David recently explained: "In this era of Wild West style lawyer advertising, it has never been more important for the public to have an easy to use and reliable means of identifying the small fraction of practicing attorneys who truly have substantial experience trying lawsuits. Board certification programs help consumers of legal services make more informed choices. Too many lawyers are out there claiming they have substantial trial experience, when the truth is they have never or hardly ever tried a case. Board certified trial lawyers have proven their substantial trial experience in ways the public can trust."

David is also a Diplomate of the American Board of Professional Liability Attorneys (ABPLA). He is Board Certified* by the ABPLA in Medical Malpractice and is the only plaintiffs' attorney in Illinois with dual board certification* in Civil Trial Advocacy and Medical Malpractice. Like the NBTA, the ABPLA is a non-profit organization accredited by the ABA to issue attorney board certifications.

Best Lawyers has named David as one of the Best Lawyers in America and Martindale Hubbell has rated David "AV Preeminent", their highest professional rating. Moreover, David has been an Illinois Super Lawyer every year since the inception of the Super Lawyer program; and Avvo rates David "10.0 Superb", their highest attorney rating. The National Trial Lawyers Top 100 Trial Lawyers has awarded David the distinction of being one the top 100 trial lawyers in Illinois.

* Board certification is not required to practice law in Illinois, and the Illinois Supreme Court does not recognize specialties in the practice of law.

100% of Practice Devoted to Litigation

Supreme Court of the United States of America, 2000

"Babies Have a Right to a Safe Seat With Proper Restraints - The Infant Seat Exception Should be Abandoned", DePaul University College of Law, International Aviation Law Institute; Issues in Aviation Law and Policy, Volume 12, Autumn 2012

"The Pre-Abdullah Consensus That Federal Law Does Not Preempt the Field of Aviation Safety in Tort Law Should Remain the Law", Issues in Aviation Law and Policy, Spring 2009

"Small Talk in the Cockpit is a Big Problem Requiring More Than Just Lip Service", Issues in Aviation Law and Policy, Spring 2007

"Cockpit Image Recorders: A Picture is Worth a Thousand Words", Issues in Aviation Law and Policy, Spring 2005

"Will Boeing's Recent Move to Chicago Mean That More Commercial Airliner Crash Cases Will be Litigated There?", Issues in Aviation Law and Policy, 2003

"A 73-Year Odyssey: The Time Has Come For a New International Air Liability System", Issues in Aviation Law and Policy, 2002

Bennett v. Southwest Airlines Co (US Court of Appeals for the 7th Circuit 2007)

In re Air Crash near Nantucket Island (USDC ED NY 2004)

In re Air Crash near Morrisville (USDC MD NC 1997)

Third Party Actions (one class once per year most years), Professor Eagle, IIT-Kent College of Law, 1984 - 2006

Elected Associate of the American Board of Trial Advocates ("ABOTA")