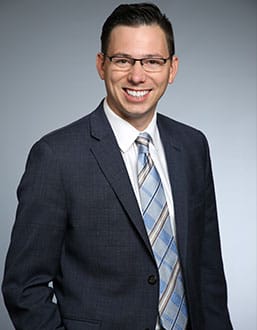 Matthew Sims is a shareholder with the firm and a trial lawyer who represents victims and their families in catastrophic personal injury and wrongful death cases. He has litigated cases in jurisdictions across the country and has tried cases to verdict in several states.

He is currently involved in numerous high profile cases, including the Boeing 737 Max 8 litigation arising out of the crash of Ethiopian Airlines Flight 302, where he serves on the Plaintiffs' Executive Committee, the Husky Superior Refinery explosion litigation, where he is the court appointed lead plaintiffs' counsel, the 2019 Henry Pratt Mass Shooting litigation, and the 2022 Highland Park Parade Mass Shooting.

Matthew is a published author and presenter on products liability and aviation crash litigation. He is the author of the Illinois text on Strict Products Liability. He also serves as the Vice-Chair for the American Association of Justice's Aviation Section.

Some of Matthew's recent recoveries on behalf of his clients have included:

• $16.5 million judgment for two victims of a mass shooting

• $7.6 million for workers poisoned by lead in a shipyard

• $6.6 million jury verdict for an ironworker injured at a jobsite

• $5.75 million for a passenger who walked away from a commercial airplane crash but later developed back problems

• $4.9 million in a slip and fall that resulted in a fractured leg and eventual death of a woman at work

• $4.3 million record-setting highest hand amputation compensation ever recovered in Illinois following an industrial work accident. The worker's hand was reattached and he regained function despite the injury.

• $2.3 million in a case involving the malfunction of an airport service vehicle that pinned a worker against an aircraft.

• $2.25 million record-setting highest personal injury recovery ever for any injury in that jurisdiction for a client who suffered a fractured femur and burns in a car accident.

• $2 million record-setting recovery for an ankle injury in that jurisdiction. The original offer from the defendants before expert discovery commenced was 25 cents.

• $1.075 million record-setting settlement for a 95-year-old woman who suffered a broken hip. The recovery is the highest injury settlement ever for a nonagenarian in the state of Illinois.

• $1 million for a husband and wife struck by a truck in their minivan.

• $939,000 record-setting settlement for a broken ankle in a trucking accident that also set a record as the highest ever in that jurisdiction.

Matthew has also handled numerous airplane and helicopter accidents that have resulted in substantial confidential recoveries on behalf of his clients.

Due to his experience in representing his clients, Matthew has been selected as an Illinois Super Lawyer Rising Star every year for the last nine years, a distinction limited to only the top 2.5% of lawyers under the age of 40 in the State of Illinois. Chicago Lawyer Magazine has recognized him as one of Illinois' "40 under 40". Best Lawyers in America has repeatedly named him as "Ones to Watch." The National Trial Lawyers has selected him as a "Top 40 Under 40" attorney practicing in the field of plaintiff's personal injury every year for the last 6 years.

Matthew originally hails from the western suburbs of Chicago where he grew up and attended high school. He received his bachelor's degree from Purdue University, earning a Certificate of Superior Achievement, before returning to Chicago to attend law school.

Matthew graduated from The John Marshall Law School (now known as the University of Illinois Chicago Law School) with his Juris Doctorate, as well as a Certificate in Trial Advocacy, which was awarded to less than 3% of graduating students. In law school, he won the school-wide Dean Herzog Moot Court Competition. His legal brief was also recognized as the best written brief of the competition. During law school, he was also chosen from a select group to study abroad in the field of trial advocacy at The Honorable Society of the King's Inn in Dublin, Ireland. As a law student, he clerked for the Cook County Public Defender's Office, as well as the Presiding Judge of the Fifth District of Cook County.

·        Honors: Trial Advocacy at The Honorable Society of the King's Inn - Dublin, Ireland

·        National Board of Trial Advocacy – Board Certified in Civil Law

·        Supreme Court of the United States of America

·        Put the Phone Down! Distracted Driving Deaths on the Rise in Illinois, Legal Examiner, 2016

·        Post-Ramirez: A Close Focus on the Current State of the 55-Series Illinois Pattern Instructions, IDC Quarterly; 2014

·        Danger: Res Judicata Ahead - Why Construction Contractors Need to Take a 'Use it or Lose it' Approach to Express Indemnification, and Other Cautionary Tales Arising from Camper v. Burnside Construction, IDC Quarterly; 2014