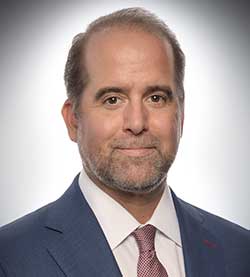 Troy Rafferty is a shareholder at Levin, Papantonio, Rafferty. He litigates mass tort, pharmaceutical, and major personal injury cases throughout the country. Mr. Rafferty has been recognized as one of the country's top lawyers through inclusion in the publication, The Best Lawyers in America, as well as The Legal 500. He has also been recognized as one of Florida's top lawyers by Florida Super Lawyers.

Mr. Rafferty has been awarded an AV rating by Martindale-Hubbell legal directory, the highest rating for competence and ethics issued by that publication, and reserved for attorneys designated as outstanding in their field. Mr. Rafferty has been selected by the American Trial Lawyers Association as one of the Top 100 Trial Lawyers. He is a fellow in the International Society of Barristers, and one of only 500 U.S. attorneys inducted into the International Academy of Trial Lawyers.

Mr. Rafferty is board certified in civil trial law by The Florida Bar. He is active in the Florida Justice Association, where he served as President from 2014 – 2015. Prior to that he served on the Executive Committee and the Board of Directors. In 2016 he was awarded the Perry Nichols Award, the highest award given by the FJA and is awarded to an attorney whose perseverance, commitment, and unmatched dedication to the civil justice system is at the forefront of their lives.

In 2018, he was awarded the Living the Dream HK Matthews Legacy Award in recognition of his commitment, vision, leadership, service, and contribution to keeping Dr. Martin Luther King Jr.’s dream alive.

Mr. Rafferty is a frequent lecturer throughout the country to trial lawyers on mass tort litigation and general trial practice. He is currently licensed to practice law before all Florida state courts, the United States District Courts for the Northern and Middle Districts of Florida, and the United States Court of Appeals for the Eleventh Circuit.

Mr. Rafferty is also an active philanthropist, and along with donating to many local charities, he also funds two local scholarships under his name (The Rafferty Scholarship/Award), which are awarded annually to two area high school prep athletes. Each of the area high schools also competes to be awarded the Rafferty Cup for excellence in athletic achievement. In addition, he founded the Rafferty Hope Scholarship which is given each year to two underprivileged children to pay their college tuition.

Board Certified Civil Trial Lawyer by the Florida Bar

Appointed to the Civil Trial Certification Committee by the Florida Bar

Antidepressants and Birth Defects: How The Past Should Guide The Future, Florida Justice Association Journal, September/October 2011

With Contrast or Without Contrast - What is the Gadolinium Based Contrast Agent Litigation?, Florida Justice Association Journal, Issue 530, June, 2008

"The Next Five Years of Plaintiff’s Personal Injury Practice – Hot and Vital Areas of Litigation and Practice – The Paradigm is Shifting…Don’t Let It Pass You By" -- FJA 29th Annual Workhorse Seminar; February 18, 2015

Building the Trial Package for a Pharmaceutical Case

The Use of Technology in Jury Selection

Effective Use of Demonstratives and Technology

Trying Tough Cases Against Tough Defendants - What Has Been Learned