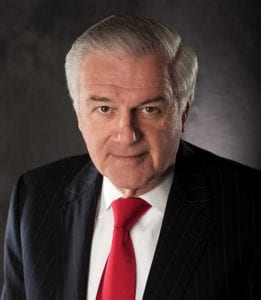 Walter J. Lack is a founding partner and the managing partner of Engstrom, Lipscomb & Lack. He received his J.D. from Loyola Law School in 1973. Mr. Lack was admitted to the State Bar of California in 1973, the U.S. Court of Appeals for the 9th Circuit in 1979, and the U.S. Supreme Court in 1981. His areas of specialty are aviation crashes, class action, complex business litigation, environmental litigation, insurance bad faith, mass toxic tort and professional liability. Mr. Lack was lead counsel for more than 1,500 residents of Hinkley and Kettleman, California (the “Erin Brockovich” case) and lead counsel in cases with an aggregate recovery in excess of $10 billion.

Mr. Lack has earned numerous awards and honors and is recognized by LawDragon Magazine as one of the 500 leading lawyers in the United States (2005-2015), by Southern California Super Lawyers as a “Top Ten Super Lawyer” (2004-present) and a recipient of American Lawyer Magazine’s “Top 10 jury Awards” in the U.S. in five separate years. He is a fellow of the International Academy of Trial Lawyers and an Advocate of the American Board of Trial Advocates. He is a lecturer to trial lawyer groups throughout the country on a variety of topics within the civil justice system.

Fiduciary Duties; What Are They? When Do They Exist? and Why Use Them? — CAALA Advocate, March, 2001

Surviving a Toxic Tort Case from Retainer to Trial — CAOC Forum, May, 1997

Formulating a Defendant’s Discovery Plan in a Mid-Air Collision — Southern Methodist University School of Law, Journal of Air Law and Commerce, Vol. 47, No. 4, 1982

The Standing Committee on Discipline for the Central District of California, 1997-2000, Member

Consumer Attorneys of California, 2001-Present, Board of Governors

Fellow of the International Academy of Trial Lawyers, Member, Board of Directors

American Board of Trial Advocates, Advocate

Loyola-Marymount University, 1986-1989, Alumni Board of Directors

Loyola-Marymount University, 1991-1994, Alumni Board of Directors

100% of Practice Devoted to Litigation

Best Lawyers® Lawyer of The Year in Los Angeles, 2015

Finalist, Consumer Attorneys of California Trial Lawyer of the Year, 2003-2004